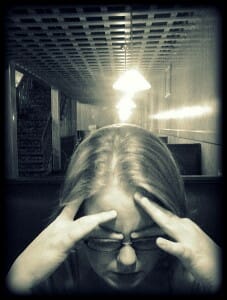 Being introverted has its benefits. Introverts often have a greater appreciation of understatement and subtlety than extroverts and are usually deep thinkers, meaning that they strive to attain a richer, fuller understanding of the world around them. However this type of personality is not without its negative points, one of them being that introverts are more susceptible to certain health problems.

Research carried out by award winning mental health journalist John McManamy suggests that they are more prone to bipolar disorder and depression. He asked a number of people who were suffering from one of these conditions to complete a personality test and email him the results and found that eighty-three of the first hundred people to email him were introverts. His findings are supported by a study conducted by the University of North Carolina that concluded that seventy-four percent of depressed people are introverts.

McManamy suggests that the fact that introverts are more likely to suffer from these mental illnesses could be due to their tendency to sometimes isolate themselves. He says that in order to protect yourself against these conditions, it is important to break out of your comfort zone and connect with other people. Perhaps you could do this by joining a group or taking up a sociable hobby. Alternatively you might want to invest some time in learning how to overcome your natural inclination to avoid certain social situations.

It isn’t just introverts’ mental health that can suffer if they let the negative side of their personality type get the better of them. The results of a study carried out by the Netherlands Organization for Scientific Research indicates that they can also fail to speak up about physical health problems, which means that they get a worse standard of care. She observed that introverted heart failure patients were six times more likely to have a poorer state of health than their extroverted counterparts. A good way of getting round this is to always make sure you consult a doctor when you feel that you are under the weather no matter how much you might feel like braving it out. There is no point putting your health at risk for the sake of avoiding speaking up.

Research cited in the  Bangor Daily News indicates that introverted people might also have a worse immune system than extroverts. A study showed that introverted HIV positive men have nearly eight times more viral particles in their blood than outgoing HIV positive men. Psychiatrists have hypothesized that this is because introverts tend to suffer from a higher degree of stress about certain things, for example contact with unfamiliar people, and stress can negatively impact upon the human body. There is an easy way to combat this: put systems in place to make socializing with people that you haven’t met before less stressful. Learn how to approach new people knowing that you will be competent at talking to them and you can improve your natural defense system and reduce the likelihood of falling ill.

Introverts are also more susceptible to drug addiction. Research conducted by Roszell et al has shown that people who are receiving treatment for heroin addiction and are maintained on methadone are more likely to be introverted. A study carried out by Hong et al of the School of Medicine at the University of North Carolina at Chapel Hill demonstrated that drug addicts and alcoholics tend to be far more introverted than average. This is possibly due to the link between introversion and depression. According to a report published in  Psychology Today, introverts can often become depressed because they perceive that other people view them as ‘odd’ because they are less outgoing than most other people. The magazine advises that self-acceptance and understanding of the issues surrounding introversion are the key to avoiding or overcoming this condition. Again, forcing yourself to socialize might also help to prevent you from lapsing into depression and reduce your chance of developing an addiction.

Fortunately none of the health conditions that introversion can bring about will definitely manifest themselves within the lives of every introvert. Maintain a large circle of friends, always consult a doctor when you feel under the weather and try not to stress too much about things and you will be able to lead a happy, fulfilling life. In order to get the most out of your career, you might also want to think about business coaching for introverts. That way, you will be able to achieve the highest level of success that you are capable of.

How intriguing. What do you think about the research findings? Can you speak to having any of these health problems? Do you think that they are attributed to how well you manage what you might think to be downsides of introversion? I’ve never thought being an introvert was a bad thing! Maybe that’s one possible reason I don’t suffer from these things.