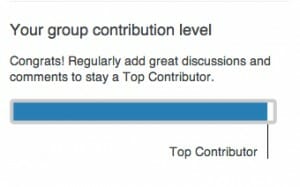 Fortunately I was visiting with family and focused on enjoying our time together when I got this surprise about my LinkedIn “group posting status” appearing across any and all my pages.

The message in a blue box, on the right side of every page read, “Your posts are now being moderated group wide.” Group Wide Auto Moderation or GWAM.

What?! The groups where I contribute actively, that contribution scale on the right of the window will show “Top Contributor.”

The message of posts being moderated brought on feelings of surprise, frustration and even anger. This last feeling after I tracked down the LinkedIn explanation which is specifically vague. After all, if you don’t know what caused the problem how can you fully correct it and recover.

It almost felt I was given a jail sentence.

Another blogger, Jen Dewar, used the term SWAM, “site wide auto moderation” in a post on her blog, “Help! I’ve been SWAM’d on LinkedIn!” Actually many people refer to that term.

I believe more appropriately it’s GWAM because you are still able to post LinkedIn status updates. But whether it’s SWAM or GWAM it is certainly something to track down, act on and correct. Here are 5 tips to understand and be able to get out of LinkedIn group posting jail.

It can be because of one contribution to just one group that LinkedIn does not identify for the accused, which marked as spam or flagged irrelevant.

For me it was hard to say how recent the post was. It could have been years ago since people often jump on posts that go back as far as I’ve seen to 5 years ago.

You know the kind of perpetual posts I mean: highly popular and evergreen content posts or a post that is the moderators invitation to promote yourself in some way.

Only two possibilities in the LinkedIn help explain why a “group wide auto moderation” status message would appear everywhere once you log in:

Irrelevant – that made me smile. Seriously? An introvert say something irrelevant? Not in my estimation.

I’m usually pretty careful to read a group’s profile to see what the moderator finds to fall in unacceptable post. Sometimes I’ll miss something like – no links to your own blog posts. Yikes. I’m sorry for that.

One moderator also pointed out that groups can be fully moderated normally meaning, and all member’s posts are moderated. Those group owners or moderators simply have a preference to look at each post before making it active. That also might be in the group’s profile.

Being one who values learning first hand, I thought I would test the GWAM. I selected five to ten of the groups I am most active in and labeled a new discussion: Has this ever happened to you: all group posts are moderated?

Up pops a message I don’t get in those active groups. This was another shock. After all, it was a group it’s a group my contributions are regular but now, my posts are going into moderation?

Some people having experienced this had helpful information. Most people did not understand what would cause such an action by LinkedIn.

It was also consoling that many people commented that they knew me from my discussion shares and supported my disbelief. Someone commented “You are the last person I would expect to have this happened.” So I was not going crazy by the question I kept asking myself – how did this happen?

3. Understand how GWAM can happen.

Under every post in a group discussion is a phrase “flag as inappropriate.” This is a multi-purpose notification of either irrelevant, inappropriate or spam content. It’s the group moderator who decides what action to take.

If someone’s take on your post gives them any of these ideas, think about how you can control this in the future with a possible rewording.

If someone accidentally selects this, there is no reversing it. A couple of people mentioned that this was something they did and of course, were so sorry for it.

If you are in GWAM you can still post a discussion but your post must go to the group management team before it appears. Understand that some moderators work full time and do not get to posts immediately.

LinkedIn suggests you can contact the moderator directly and request to have the block removed and your name removed from moderation. The group moderator will not know which post was the problem but they can get you active again.

You’ll never know which LinkedIn post or group was the problem to put you in moderation status.

Nor do you know which group the post was in. For me going direct to each moderator seemed daunting in being in about 50 groups. However it did seem the right time to prune things down and now, there are just 40 for me.

Maybe choosing the groups I was most active in first helped with “Get out of LinkedIn Jail” card quickly. Within four days, I was posting.

Have you had this happen to you?

What were some of your findings?