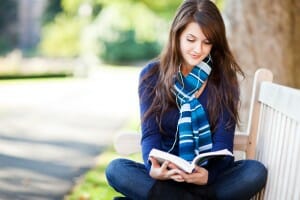 An article written by Sumanthi Reddy a few months ago addresses the idea that introverts who act like extroverts will be happier. This article is based off of studies that show that extroverts are, on average, happier than introverts. However, what this article doesn’t address is that pretending to be something you’re not isn’t fair to you.

The Difference Between Extroverts and Introverts

Extroverts and introverts have two separate approaches when it comes to social interaction. Extroverts generally enjoy being surrounded by people and having a high-stimulus environment. Introverts, on the other hand, may prefer smaller gatherings with fewer stimuli.

A common misconception is introverts are shy and quiet — however, that’s not always true. When the topic suits their fancy or when they’re around people with whom they are comfortable, introverts may talk non-stop. So, the idea of acting like an extrovert seems strange because, in a way, introverts are perfectly capable of maintaining conversations with people and being around others.

This article makes it sound as if being an extrovert is better than being an introvert. Ms. Reddy says that acting extroverted — throwing yourself out there, being the life of the party and feeding off other people’s energies — will make introverts happier. Here’s the thing, though — how can acting like someone you’re not make you happier?

So how can introverts act like extroverts without getting mentally drained?

In this day and age, when children and adults are encouraged to be themselves, asking someone to pretend to be something they’re not seems counterintuitive. While Ms. Reddy’s reasoning behind her claims is that it’s been proven that acting extroverted make introverts happy, I have to wonder how happy you will be in the long run pretending to be something you’re not.

Introverts are capable of acting like extroverts, just like extroverts are capable of acting like introverts. Introverts function well in groups of people, and, despite what many people believer, are not always shy wallflowers at social gatherings. In fact, some of the most successful people in America are introverts —Barbara Walters, David Letterman and Diane Sawyer are all introverts who have made a living being around people. Even President Obama has been called an introvert. Introverts can be charming and charismatic, however, being outgoing for long periods of time does not make them happier – it makes them exhausted.

I’d say to all the introverts like me out there: Don’t worry about being something you’re not. Doing what you enjoy will make you happier. Changing yourself will not make you happier in the long run. Embrace your introversion and thrive with it.

But what do you think? Do you agree with the original article, that acting like an extrovert can make you happier? Let me know in the comments.