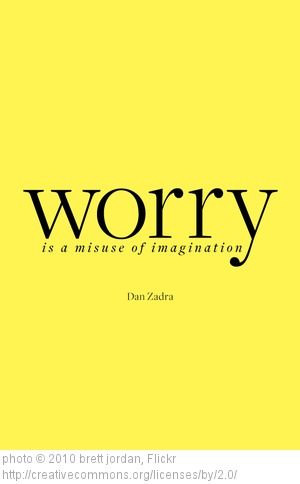 Worry is only a set of thoughts. When our worry moments cause us to take on useless habits, beliefs and actions is when it matters.

As I reflect on this year coming to a close, I thought about any of my thoughts of worry. I made a list to consider, did any of my worry change things for the better or for the worst?

If it did, was the Now I know the answer at least to the top ten 2013 worry moments.

One of my take-aways is that Chanel, never worried. She lived a wonderful life.

My score is 9 out of 10 of these worries were unproductive time and energy. This last worry continues and will take more time. Chanel was my daily companion and while many speak of euthanasia as a compassionate act, the holidays are a reminder of the joy with her in our life.

We all have a range of thoughts all day long from what we might label good to bad. Worrying is unproductive and is as worthless as a crystal ball. Thoughts themselves do not mean anything. It’s the meaning we give to our thoughts that has an affect.

What kinds of things do you worry about? Does your worrying affect any of the situations in a positive or negative way?